GameMaker has array_sort and ds_list_sort built-in. As it turns out, these are pretty fast. It's not that they use a faster sorting algorithm than O(nlog(n)), but because - and if you've been using GameMaker for an extended period of time, you probably have a pretty good idea about why - GML is a slow language. The built-in sorting functions run in native code, which will always outperform the same operation written in GML by a large margin (even on the YYC).

See the included tests for examples:

This should be obvious, but the YYC speeds this function up considerably.

Some of you computer science nerds may also be familiar with Merge Sort, which is another efficient sorting algorithm which may perform similarly to QuickSort. I may someday implement Merge Sort, but I have a feeling it won't perform nearly as well in GML as QuickSort, due to how slow allocating arrays in GML is.

See the quicksort_tests for examples of other compare functions.

My standard disclaimer of

As usual, the asset is free as-is. I'll fix simple or game-breaking bugs but more involved support requires payment via either Itch or Patreon.  I get the final say in what constitutes "game-breaking."

Amazing work! This is incredibly useful. Can't wait to see what you're cooking up now! 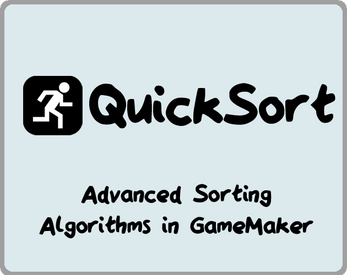