I've made a few terrain editors over the years. Circa 2016 there was this thing, which isn't very impressive but it does the job - or a job, anyway - and in 2017 I made a new version which could do a bit more but still wasn't anything to write home about. I've wanted to give it another go for a while, and recently it was requested that I add some things, so this week I finally sat down and made something that I actually don't feel embarrassed showing people.

If you've used my other ones, or most other terrain editors, you know how this goes. Click on the land to deform it (left click pushes it up, right click pushes it down). You can modify it in a few different ways, smooth it out, paint it, set the texture, export it to a heightmap or 3D model file and some other things. Documentation can be found here.

In the past, I would build two versions of the program, one normal one and one using the GameMaker YYC. While it was nice to have a version that performed noticeably better under duress, that's not really necessary anymore, as pretty much all of the expensive work has been outsourced to a C++ extension anyway.

You might occasionally notice the available named "beta." Those are, as the name implies, test versions containing new features that are still a work in progress. They shouldn't be hopelessly broken, but they may be incomplete or contain minor errors.

There are still some things I want to add, but I'd like to get some user feedback first so these things will come later. I won't promise all of them will get done, but I'd sure like to.

Obviously, requirements scale up with the size of your terrain. Editing a 128x128 terrain should work pretty well on just about anything, but a 4k terrain will be much more computationally expensive. However, it's generally not a linear scale; a 4k terrain will usually not be 1024x more performance-intensive than a 128 terrain.

The code's on Github. The C++ extensions are also on Github.

As usual, the asset is free as-is. I'll fix simple or game-breaking bugs but more involved support requires payment via either Itch or Patreon.  I get the final say in what constitutes "game-breaking." Features may otherwise be added on the basis of "whenever I feel like adding them," which has admittedly been pretty often lately. 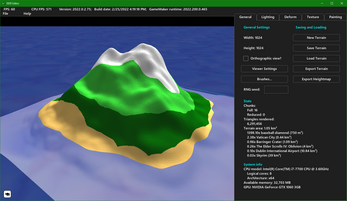 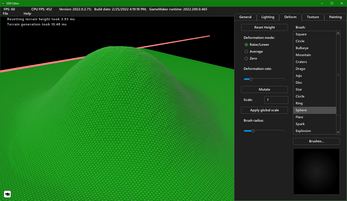 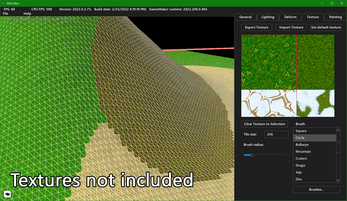 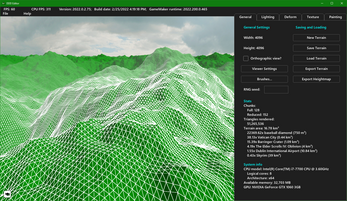 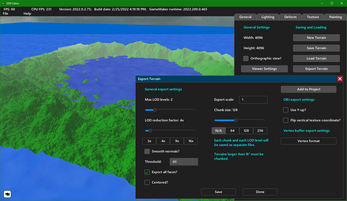 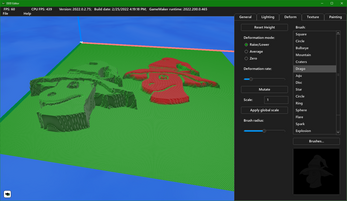 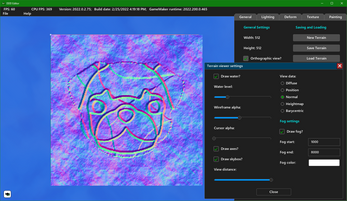 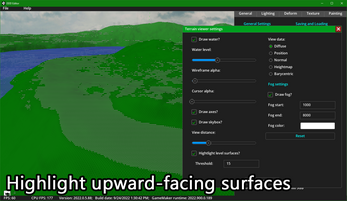